Ed Sheeran has come a long way from his humble starts singing in London’s pub scene. He’s arguably the biggest artist in the world at the moment and has very much reached the stadium heights with Damien Rice which he first sang about all the way back at the start of his career. Though it is with his most recent album Divide that the singer managed to break UK chart history by taking up the majority of the top 20 spots with all his own songs, the moment he seemed to first peak in global stardom was in 2015 when he played his three sell-out nights at Wembley Stadium.

These gigs were not just a momentous milestone for Sheeran but for the music industry as a whole because Sheeran became the first ever artist to play the gig entirely solo without the help of a backing band. However, he was joined by Elton John on the last night of his three gigs for a quick duet of Don’t Go Breaking My Heart, but this was not part of the main show and for the entirety of the other gigs and the rest of that gig Sheeran entertained the crowd completely by himself. How is that Sheeran came to be the first artist in history to do this? Division of Labour.

Ed Sheeran utilises this concept in his live performances by using a loop station. A loop station is a recording device which records a sound and plays that sound on repeat and more and more layers of sound can be added to the initial sound. The loop station is operated using the artist’s feet, which frees up their hands to play their instrument, in Sheeran’s case his guitar. Sheeran can be seen below using his loop station during a performance. 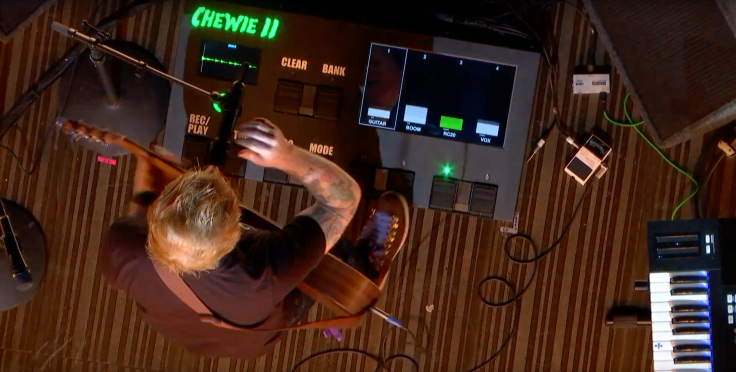 One of Sheeran’s best ever performances with his loop station, in my opinion, is his performance of his song You Need Me, I Don’t Need You on the Live Room sessions which you can find a link to below:

The performance perfectly showcases the singer’s process in his live performances. First, he introduces the opening riff of the song, then he starts layering it with backing vocals and beat boxing to add a beat to the song. Then he starts slapping and hitting the strings of the guitar while they’re muted to help further the level of percussion to the song, then he introduces the main chord progression to the song and finally adds the last layer to the song with his lead vocal.

So, the song essentially consists of four pieces, percussion, vocals, rhythm, and lead guitar. Which without the use of a loop station would require a four piece band to play live. Though by using the loop station and dividing up each task and having it play on repeat simultaneously, Sheeran is able to do the jobs of four musicians at once and sell out stadium concerts by just himself.

2 thoughts on “Ed Sheeran, Four Musicians For the Price of One”