For the size of the country that Ireland is, it hasn’t done too poorly in terms of producing music acts. The Republic of Ireland’s population is still under 5 million and Northern Ireland’s is just over 1.8 million, and yet we have managed to produce some heavy weight acts to the world of music. Thin Lizzy, U2, Kodaline, The Script, Ash, Westlife, Boyzone, Damien Rice and Snow Patrol all spring to mind. Not to mention the influence Ireland’s traditional music has had on folk artists like Bob Dylan and Neil Young. So, on the world stage, Ireland seems to be doing quite well. Though while this may fill us with a sense of national pride, if you break the artists who are achieving this international success into their native counties we see that they all tend to come from one or two certain areas. Why is this? Regional Disparity.

Regional Disparity in economics refers to certain regions within countries performing better than others. For example, in Ireland, Dublin tends to outperform smaller populated counties like Louth and Sligo in contribution to national GDP. The same can be said for Ireland’s contribution to the world of music. Using this list of the top 20 best-selling singles by Irish acts in the UK over the last 20 years, we can see that a large number of the artists come from County Dublin. 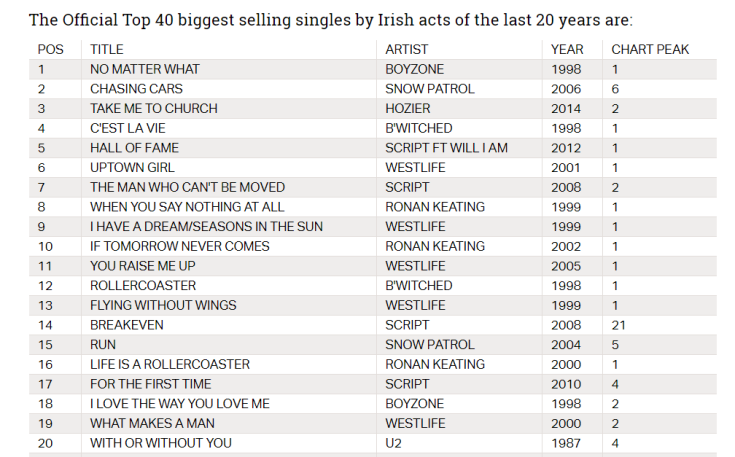 The map above clearly shows the large disparity between the Dublin region and the rest of the island. We can also see that counties which have artists on the list but do not have major cities themselves, tend to be located very close to a major city. Down for example, has two artists and it just so happens to border Northern Ireland’s capital Belfast (located in Co. Antrim). Wicklow and Meath also have artists and border The Republic of Ireland’s capital city Dublin (located in Co. Dublin).

The reason for this is that large cities tend to have the infrastructure required for musicians to be able to earn a living, like venues for gigs and recording studios. It is because of this infrastructure that musicians are able to learn and practice their craft and become successful. It’s also why we tend to get scenes in music which develop in certain geographical locations e.g. the Seattle grunge movement, the Manchester indie scene and the New York hip hop scenes of Brooklyn and the Bronx.

Having said that, you will always get one or two outliers who are so committed to their craft they will leave their home place to pursue music. In this case it’s Westlife’s own Mark Feehily from Sligo.