Musicians make money in two ways from touring. The first being the sales from concert tickets and merchandise, the second is the increase in consumption of the musicians’ music and in particular their back catalog. When people go to see an act in concert they generally do a bit of preparation to get them into the mood for the gig a few days before.

In the old days this involved getting their hands on the musicians’ albums, now in the modern age of streaming it just means searching up the artists on Spotify. This may seem like a small thing but remember that artists receive payment for each stream they receive on Spotify. So if there are enough people who do their pre-concert preparation, the artist can stand to make quite a bit of money.

Just take the Arctic Monkeys recent Dublin gigs this week. The Sheffield rockers played two sell-out nights in Dublin’s 3 Arena on the 24th and 25th of September. The days leading up to the concert the band had one song in the Irish top 200 chart on Spotify. The days of the concerts the bands songs shot into the Irish top 200 on Spotify going from having just one song to twelve entries (see graph below). 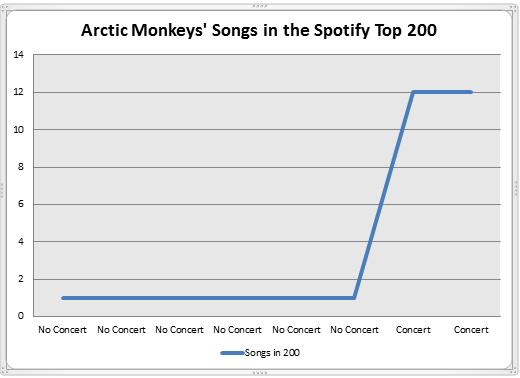 The Arctic Monkeys received a huge increase in the number of streams of their music in Ireland because their fans were listening to their music leading up to the concert. This increased the royalty payments that the band received that week. This effect can be seen in the activities of other artists as well. Just take a look at how the Rolling Stones’ Croke Park gig on the 17th of May this year increased the number of songs they had in the Irish top 200 Spotify charts. 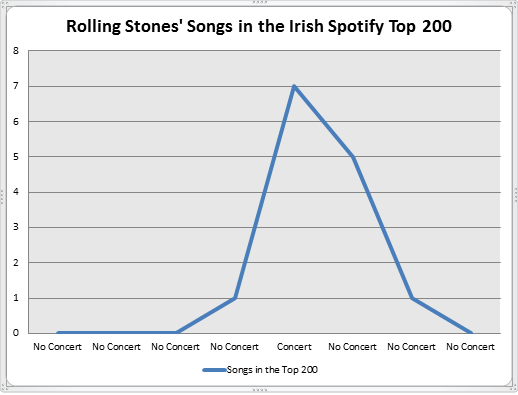 The band went from having no entries in the chart two days before their concert to having seven songs in the chart the day of the concert. Again, this increased the royalty payments that the band received that week meaning more money for Mick and the boys. And that is just for Ireland, imagine multiplying this effect across all of the countries the band will play in, it all adds up to quite a bit of money.

4 thoughts on “Why Musicians Tour”