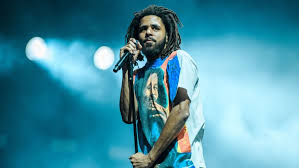 At just 33 years old and a Grammy win already under his belt, J Cole is without doubt one of the most successful rappers of his generation. The North Carolina native is acclaimed for one achievement in particular; he went platinum with no features. Meaning that J Cole was able to make an album that sold in excess of 1,000,000 copies with no other artist featuring on the album’s tracks. This is so amazing because the hip hop genre is littered with tracks where artists collaborate together.

There are two main reasons for this, firstly, the hip hop genre is effectively spoken word poetry that has rhythm, so the melody in songs is more minimal than in other genres. So, artists collaborate with singers so they can incorporate melody into their song and capitalise off it’s more catchy nature. Secondly, collaboration is a way of merging the qualities of numerous individual artists together to create one piece of work, and it also utilises the power of artists as a brand. For example, if an unknown artist releases a song people may not listen to it because they are unfamiliar with the artist, but if that same unknown artist released a collaborative track with Jay-Z then a lot of Jay-Z’s fans would be inclined to listen to it.

This is why we tend to see so many collaborations in the music industry nowadays. Combining the power of two or more artists generally makes a song more likely to succeed. A previous post on this site (Here) looked at the type of music that was dominating the Irish charts. It found that 65% of the songs in the Irish top 20 were collaborations. This collaborative behavior is not just exclusive to the music industry, the world of business constantly sees firms join forces to combine their collective skills and produce an individual product out of it.

When they do this it is called a joint venture. A famous example of this is Google Earth, which is a service created by both Google and NASA that allows people to look at satellite images of the world. The collaboration was born out of the both organisations combining their assets and knowledge to make one product, Google had the technological knowledge and NASA had the satellites. The entire economy is full of examples where individuals or organisations collaborate together in order to create commodities, even in the music industry. This is why there are so many collaborations in music today and what makes it so impressive that J Cole was able to go platinum by himself.