Happy New Year everyone! Seen as this is the sites first post of 2019 I thought I would take inspiration from the festive period for it. Now that the Christmas period is over it means a few things have probably happened. You’re probably a bit worse for wear in work and you’ve probably heard this song hundreds of times the past few weeks. The song is of course Fairytale of New York by the Pogues and Kirsty MacColl. Released first in November of 1987, the song has become one of the most iconic Christmas songs of all time and a staple in pubs and parties all over the world.

What amazes me so much about this song, aside from the fact that it’s a masterpiece, is that even though I adore it as a song; I can’t bring myself to listen to it at any other time of the year. It’s so strange that even though I think it’s incredible if it came on during the summer I wouldn’t be able to listen to it. This is probably just because I associate it with Christmas time and when I hear it during the summer something must feel wrong about it. To see whether this problem was just me or more of a common issue, I tracked the weekly streams of the song in Ireland’s Spotify top 200 over the festive period. The results can be seen in the below graph. 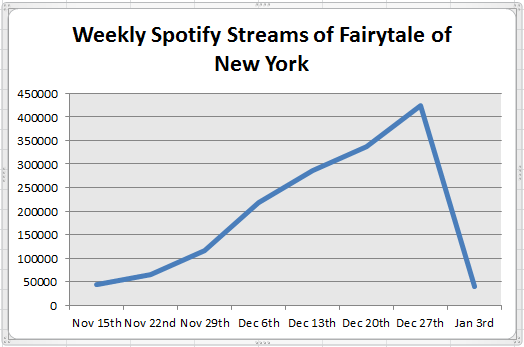 As can be seen above the song starts to enter the charts the week of November 15th at 44,634 streams. It then increases with each week until the week of Christmas where it peaks at 425,001 streams before plummeting down to just 39,272 streams the week after. This sharp fall would seemingly indicate that the majority of people have the same issue I do; once Christmas is over they just can’t listen to Fairytale of New York anymore. It’s a shame really considering how good a piece of music it is, but at least it gives Shane MacGowan a handy Christmas bonus each year.

The data used in this post was collected from https://spotifycharts.com/regional and accessed at 12:12 on the 08/01/2019

2 thoughts on “How Much Do We Listen to Fairytale of New York at Christmas?”